Our Schools and Our Future...Are We Still at Risk? 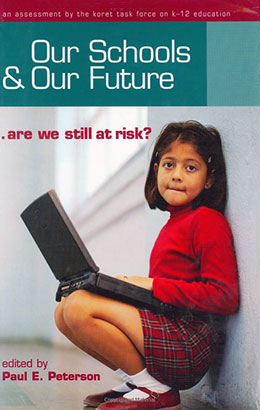 Twenty years ago, the National Commission on Excellence in Education delivered a shocking report called A Nation at Risk, which awakened millions of Americans to a national crisis in primary and secondary education. But today, while reverberations from that report are still being felt, solid and conclusive reforms in American primary and secondary education remain elusive. Why? In Our Schools and Our Future, the Koret Task Force on K–12 Education looks at the response to the commission's report and analyzes why it produced so much activity and so little improvement. Among their findings, the members of the task force reveal how many bold reform proposals have been implemented in limited and piecemeal fashion. They conclude that fundamental changes are needed in the incentive structure and power relationships of schooling itself and offer recommendations based in three core principles: accountability, choice, and transparency. Accountability, they explain, will mean that everyone in the system will know what results are expected, how they will be measured, and what will happen if results are not attained. Choice will bring freedom, diversity, and innovation. Transparency will yield the information needed to assure both top-down accountability and a viable marketplace of methods and ideas. The results of these three taken together, they assert, will be a reinvigorated yet very different system that will rekindle Americans' confidence in public education.