Endangering Prosperity: A Global View of the American School

A sobering new book on the long-term cost of a stagnant U.S. education system

“Just when you thought we’d reached a consensus on the need to dramatically improve America’s schools, a chorus is emerging to suggest all is well. Endangering Prosperity contains all the facts and figures needed to put an end to such dangerous and misguided thinking.”

Those are among the questions asked by three of the world’s leading education scholars in a groundbreaking new book hitting bookshelves on September 3rd, just in time for the new school year.

In Endangering Prosperity, scholars from Harvard, Stanford, and the University of Munich shows just how far American students are falling behind their global counterparts and how the looming failure of our education system imperils our economic future.

Through their research, the authors show just how dire the situation is:

Absent a radical change in the way we educate our children, America faces a disconnect between a dynamically changing world economy and a stagnant school system unable to produce the knowledgeable, highly skilled citizens needed to ensure the country’s future prosperity. Our lagging schools are costing America hundreds of billions of dollars in GDP each year because they are graduating mediocre students who can’t compete globally.

The authors conclude that the current way we educate our children has failed. Despite decades of exhortation from politicians and assurances from the education establishment, we are spending billions in federal tax dollars on education each year without seeing the anticipated results. Among findings:

This book is a call to action that every school leader—and every parent—in America must read – a call to action to take radical steps to overhaul and improve the way we educate our children or face the consequences. 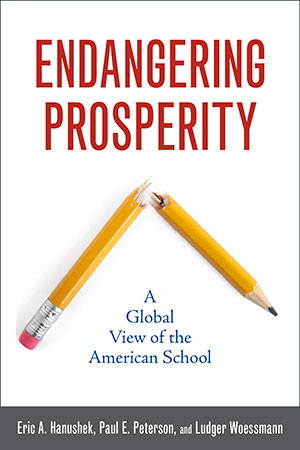 Eric Hanushek is the Paul and Jean Hanna Senior Fellow in Education at the Hoover Institution.

Paul E. Peterson, the Henry Lee Shattuck Professor of Government, directs the Program on Education Policy and Governance at Harvard University and is a senior fellow at the Hoover Institution.

Ludger Woessmann is a professor of economics at the University of Munich.