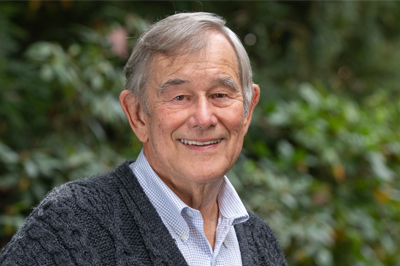 Paul E. Peterson is Henry Lee Shattuck Professor of Government and Director of the Program on Education Policy and Governance at Harvard University, a Senior Fellow at the Hoover Institution, and the Senior Editor of Education Next: A Journal of Opinion and Research. He serves as a member of Hoover's Education Success Initiative (HESI) focusing on the improvement of education policy and providing public education solutions for state education and policy leaders.

Peterson is a former director of the Center for American Political Studies at Harvard University and of the Governmental Studies Program at the Brookings Institution. He received his Ph. D. in political science from the University of Chicago. He is a member of the American Academy of Arts and Sciences and the National Academy of Education, and has received fellowships from the Guggenheim Foundation, the German Marshall Foundation, and the Center for Study in the Behavioral Sciences.

He has evaluated the effectiveness of school vouchers and other education reform initiatives. He is author or editor of numerous books, including Saving Schools, which documents the forces that undermined the effectiveness of a once dynamic educational system. His book (with Eric Hanushek and Ludger Woessmann), Endangering Prosperity: A Global View of the American School, documents the large economic costs of a stagnant K-12 education system.

Four of his books have received major awards from the American Political Science Association. Most recently, he was awarded the Martha Derthick Best Book Award for The Price of Federalism. The award is presented to the author of a book published at least ten years ago that has made a lasting contribution to the study of federalism and intergovernmental relations.

Peterson was a member of the independent review panel advising the Department of Educations evaluation of the No Child Left Behind law and a member of the Hoover Institutions Koret Task Force of K-12 Education at Stanford University. The Editorial Projects in Education Research Center reported that Peterson's studies on school choice and vouchers were among the country's most influential studies of education policy.

He is the author of:

This book explores the application of Scalia’s textualism and originalism to education law and reflects upon Scalia’s teachings and his pedagogy. Education law may seem to be an odd vehicle for considering Scalia’s constitutional approach, but thinking about schools requires attention to political fundamentals—freedom of speech, free exercise of religion, equality of opportunity, federalism, and the proper role of the expert. Legal scholars, philosophers, and political scientists provide both critiques and apologies for Scalia’s approach.

Teachers versus the Public - What Americans Think about Schools and How to Fix Them. Paul Peterson, Michael Henderson, Martin R. West. Brookings Institution Press, 177 pages. 2014.

A comprehensive exploration of 21st Century school politics, Teachers versus the Public offers the first comparison of the education policy views of both teachers and the public as a whole, and reveals a deep, broad divide between the opinions held by citizens and those who teach in the public schools. Among the findings:

• Divisions between teachers and the public are wider and deeper than differences between other groups often thought to contest school policy, such as Republicans and Democrats, the young and the old, the rich and the poor, or African Americans and whites.

A trio of experts on international education policy compares the performance of students in American schools against those of other nations and shows the extraordinary benefits that can come from improved student performance.

Updated in a new 7th edition, The New American Democracy offers a stimulating, analytical approach to American government and a unique perspective on contemporary politics with an emphasis on elections and their importance in the American political system. The authors -- among the most well-known and well-respected scholars working in political science today --propose in their text that politicians today are perpetually engaged in the election process—a “permanent campaign”—which has profoundly affected how our government functions today.

With an emphasis on elections and their importance in our political system, this groundbreaking text offers a stimulating, analytical approach to American government that engages students as it gives them a unique understanding of their political system as it exists and functions today. (Succinct presentation of material in The New American Democracy)

Traces the story of the rise, decline, and potential resurrection of American public schools through the lives and ideas of six mission-driven reformers: Horace Mann, John Dewey, Martin Luther King Jr., Albert Shanker, William Bennett, and James Coleman. Many of these reformers sought to customize education to the needs of each child. But in ways that were never anticipated, reform efforts centralized power in the hands of those who controlled institutions remote from the concerns of families and local communities—large school districts, states, courts, collective bargaining agreements, and, eventually, the federal government. Now, the possibilities unleashed by technological innovation, when coupled with the economic impact of ever-rising cost of traditional schooling, have created an environment for another educational transformation.

The voucher debate has been both intense and ideologically polarizing, in good part because so little is known about how voucher programs operate in practice. In The Education Gap, William Howell and Paul Peterson report new findings drawn from the most comprehensive study on vouchers conducted to date. Added to the paperback edition of this groundbreaking volume are the authors’ insights into the latest school choice developments in American education, including new voucher initiatives, charter school expansion, and public-school choice under No Child Left Behind.

While the merits of vouchers have been the subject of intense public debate in recent years, there has been very little available evidence upon which to gauge their efficacy. The first publicly funded voucher plan involving private schools wasn't established until 1990 in Milwaukee; before then, the only data on school choice came from a small, poorly designed program in California. Voucher programs grew dramatically in the latter half of the 1990s. In 2000, about 60,000 students participated in seventy-one programs, most privately funded.

What is the price of federalism? Does it result in governmental interconnections that are too complex? Does it create overlapping responsibilities? Does it perpetuate social inequalities? Does it stifle economic growth? The book addresses these questions by developing two theories—functional and legislative—of the workings of the American federal system.

"The best way of handling the question of how much to give the poor, politicians have discovered, is to avoid doing anything about it at all." This book explains why that is not an accident.

Examines the conventional wisdom about federal grants. Considers the implementation and operation of federal programs for education, health care, and housing in four urban areas to learn which programs worked, when, and why.

Was school reform in the decades following the Civil War an upper-middle-class effort to maintain control of the schools? Was public education simply a vehicle used by Protestant elites to impose their cultural ideas upon recalcitrant immigrants? This work challenges such standard, revisionist interpretations of American educational history. Urban public schools were created by a politically pluralistic society.

Comprehensive description of federal education programs that highlights the change in federal policy that takes place after 1964.

Path-breaking analysis of urban politics that shows why cities cannot be effective agents of redistributive policy.

Shows how the Daley machine, its reform opposition, and racial change form the context for school policy. Case studies of desegregation, collective bargaining and decentralization reveal how the basis for decisions can change when viewed through different interpretative lenses.