Teaching Math to the Talented: Which countries - and states - are producing high-achieving students? 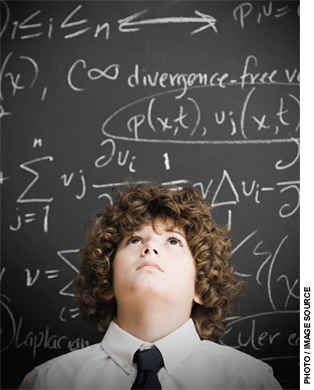 In Vancouver last winter, the United States proved its competitive spirit by winning more medals—gold, silver, and bronze—at the Winter Olympic Games than any other country, although the German member of our research team insists on pointing out that Canada and Germany both won more gold medals than the United States. But if there is some dispute about which Olympic medals to count, there is no question about American math performance: the United States does not deserve even a paper medal.

Maintaining our productivity as a nation depends importantly on developing a highly qualified cadre of scientists, engineers, entrepreneurs, and other professionals. To realize that objective requires a system of schooling that produces students with advanced math and science skills. To see how well schools in the United States do at producing high-achieving math students, we compared the percentage of U.S. students in the high-school graduating Class of 2009 with advanced skills in mathematics to percentages of similarly high achievers in other countries.

Unfortunately, we found that the percentage of students in the U.S. Class of 2009 who were highly accomplished in math is well below that of most countries with which the United States generally compares itself. No fewer than 30 of the 56 other countries that participated in the Program for International Student Assessment (PISA) math test, including most of the world’s industrialized nations, had a larger percentage of students who scored at the international equivalent of the advanced level on our own National Assessment of Educational Progress (NAEP) tests. Moreover, while the percentage of students scoring at the advanced level on NAEP varies considerably among the 50 states, not even the best state does well in international comparison. A 2005 report from the National Academy of Sciences, Rising Above the Gathering Storm, succinctly put the issue into perspective: “Although many people assume that the United States will always be a world leader in science and technology, this may not continue to be the case inasmuch as great minds and ideas exist throughout the world.”

The Demand for High Achievers

The gap between the burgeoning business demand for a highly accomplished workforce and a lagging education system has steadily widened. Even as the United States was struggling with a near 10 percent unemployment rate in the summer of 2010, businesses complained that they could not find workers with needed skills. New York Times writer Motoko Rich explained, “The problem…is a mismatch between the kind of skilled workers needed and the ranks of the unemployed.”

Skill shortages have severe consequences for a nation’s overall productivity. Two of the authors of this report have shown elsewhere that countries with students who perform at higher levels in math and science show larger rates of increase in economic productivity than do otherwise similar countries with lower-performing students (see “Education and Economic Growth,” research, Spring 2008).

Public discourse has tended to focus on the need to address low achievement, particularly among disadvantaged students. Both federal funding and the accountability elements of No Child Left Behind (NCLB) have stressed the importance of bringing every student up to a minimum level of proficiency. As great as this need may be, there is no less need to lift more students, no matter their socioeconomic background, to high levels of educational accomplishment. In 2006, the Science, Technology, Engineering, and Mathematics (STEM) Education Coalition was formed to “raise awareness in Congress, the Administration, and other organizations about the critical role that STEM education plays in enabling the U.S. to remain the economic and technological leader of the global marketplace for the 21st Century.” In the words of a National Academy of Sciences report that jump-started the coalition’s formation, the nation needs to “increase” its “talent pool by improving K–12 science and mathematics education.”